Remembering the Holocaust with knitting & music


Today is national Holocaust Memorial Day 2013 , where the millions of victims and survivors of the holocaust will be remembered in ceremonies and events across the UK. Now 68 years since of the liberation of Auswitz, it's more important than ever that we remind ourselves of this (and later genocides), and ensure that future generations understand the causes of the Holocaust and reflect upon its consequences. You can find our more about the holocaust at the Holocaust Memorial Day Trust website.

The term knitting is often used as a metaphor to describe the complex process of trying to strand together a full account of this human catastrophe, piecing it together from known events, survivor testimonies, and hidden histories that slowly emerge. One such hidden history is the activity of knitting which was carried out in the concentration camps as both a voluntary occupation, but also as enforced labour. Knitting could be said to have been a life saver in both cases.

Having a skill was essential to survival, and prisoners arriving at camps would often undergo a selection process where they would be picked out according to particular skills that were wanted by the Nazis and then put to work. Those unfortunate enough to not be selected were executed. Many women, and some men, were put to work in knitting rooms, 'stations' or 'workshops'. One such woman was holocaust survivor Zelda Metz who, on arrival to Sobibor was selected by Wagner to knit pullovers and socks for the SS.

The voluntary knitting undertaken by prisoners provided much needed moments of recreation, but also had a functional purpose in being able to provide socks and other comfort items for their loved ones and fellow prisoners. Knitters had to be resourceful in how they could obtain materials and tools for their knitting, often improvising with whatever was available, unravelling and reusing fibres from old garments or sacks. A post on Cat's Pajamas blog describes how internationally reknowned german knitter Horst Schulz learned to knit in a detention camp. He was taught by an elderly woman using knitting needles he had fashioned from rods taken from car wheels, and 'yarn' sourced from unravelled flour sacks and silk stockings. Fortunately for us Shulz survived and went on to become what some people consider 'the Kaffe Fassett' of german knitting, and is particularly known for his innovations with 'patchwork knitting', or modular knitting as it is also called.

Modular knitting, sometimes referred to as Domino or Patchwork knitting, is the process of knitting small individual pieces that are joined together to create unique garments or other projects – like patchwork but without all the sewing up. This technique allows you to design as you go along, and to work creatively with pattern, texture, direction and colour to stunning effect without the challenges posed by more traditional methods. It is also great for using up your stash, even the odds and ends.


Modular knitting has been around for a century or so, but was first claimed by Virginia Woods Bellamy who ‘invented’ a type of knitting she called Number Knitting in the 1940s which she had patented in the U.S. in 1948 (patent since expired). Modular knitting was redeveloped and made popular more recently by Horst Schulz who published two books in German in the mid 1990s which were later published in English in 2000. The term Domino Knitting was first coined for his work around this time.  A student of Horst, Vivian Høxbro (Denmark) published her book, Domino Knitting (2000) on the same subject, and other enthusiasts of the craft include Patricia Werner and Ginger Luters (US). The technique has become increasingly popular in Europe and the US, alongside the increased availability of hand painted and variegated yarns which produce exquisite knitted fabrics when used in this way. 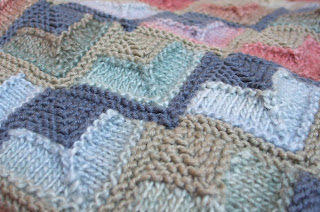 Thinking about this reminded me I had started a piece of modular knitting some time ago, and it's motivated me to dust this down and complete it. I's actually a cushion cover, and it's nearly finished anyway - so I hope to be able to show you the finished item soon.

So today I'm going to be remembering the holocaust while I knit, and listen to Anglo-Polish songstress Katy Carr's latest album Paszport. You can learn more about Katy and her album in this interview in For Folk's Sake . Described as a tribute to lost and forgotten Polish war stories, songs  relate to and were inspired by individual stories of resistance and survival. Kommanders Car relates to the daring escape from Auschwitz made by Kazik Piechowski and a group of other Polish men who stole the uniforms of their guards and boldly drove away in the commander’s car. Mala Little Flower is a tribute to Holocaust rescuer Irena Gut Opdyke who endured beatings and rape at the hands of the Nazis for sheltering jews, and endured the loss of her resistance-fighter fiance Janek who was shot on the day of their intended wedding.  Katy will be performing at the British Museum, London, on Tuesday 29th as part of their holocaust memorial event I was a number......Memories of the holocaust.